Over the last 4 months I've been keeping track of these really nice reports from mixpanel breaking down the iPhone and iPad "installed bases" by models over time. Go ahead and have a look, there's plenty of interesting stuff there.

Yes, I realize this is usage data and does not necessarily reflect the real unit share of active devices by model (much less unit sales). For a great primer on the critical differences between all the market share metrics, Charles Arthur's article at The Guardian is a must read (also this).

In any case, usage data are still quite useful as an additional angle on installed base dynamics. I decided to focus on the weekly changes in the reported percent shares rather than the absolute value, since this second order (or first derivative) metric more clearly reveals (at least to me) all the nuanced shifts and bumps in the data, while the absolute share data seem a bit dull. Particularly, I wanted to focus on the recent trends that have developed since the respective launches for the new iPhones (late Sep) and iPads (early Nov) compared to the big bump for the week of Christmas (12/23-12/29) and the apparently more modest post-Christmas trend reset seen up to now. Just from looking at the charts in the mixpanel reports, the trends before and after Christmas for each model's usage seem quite steady and consistent.

So I wanted to visualize this in a simple way, by computing the average weekly increase or decrease in share for each model (i.e. the slope of the trend line), before, during, and after the week of Christmas. For iPhone I averaged over the 14 weeks of data from the launch up to the week just before Christmas while for iPad there's only 8 weeks from its launch prior to Christmas (or 6 in the case of the new mini). Then I recorded the Christmas week's gains and losses, and finally the average changes for the 4 weeks after Christmas up to last week. I converted the percent share gains and losses into basis points (1% = 100 bps) to avoid all those nasty decimals. I combined some of the model categories into 'other' in a particular way which showed an interesting pattern, and to keep things manageable.

I plotted these points as a sort of slopegraph but with three 'states' rather than the usual two. This is the result (click to enlarge and apologies for the small text size): 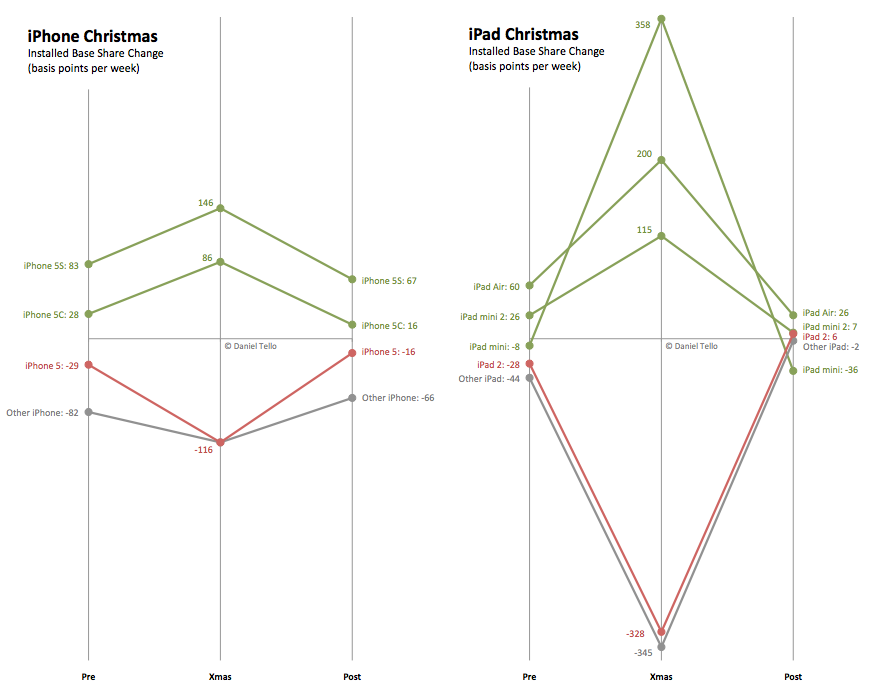 That's a somewhat surprising iPad mini Christmas boost (yes, the year-old non-retina model). Could it have been such a popular gift item? And I think the symmetries are quite suggestive of some sort of theory or causal insight, at least an intuition of an insight, perhaps? Hope you find it insightful too.