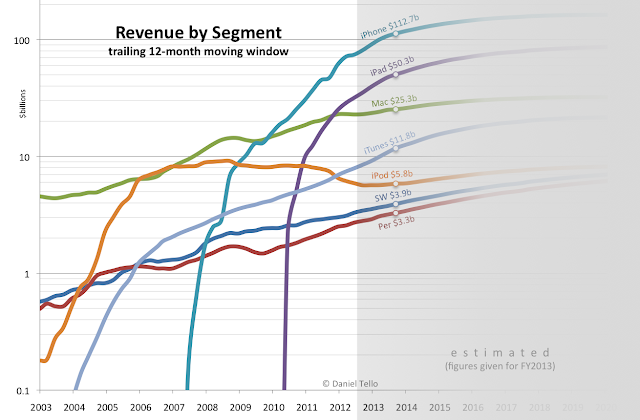 I also had a stacked one without the log-scaled vertical axis. Here's an update of it: 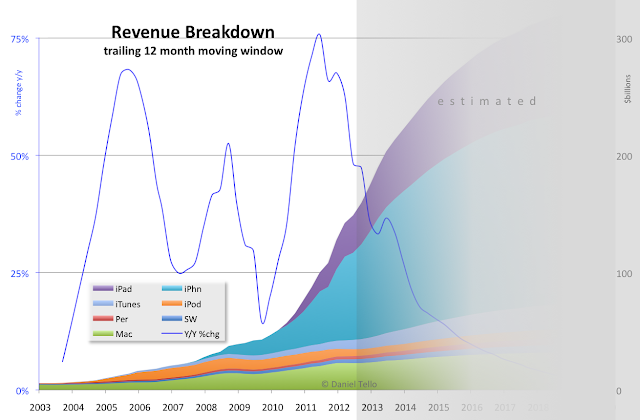 Here's another format which I first tried 2.5 years ago, just before the original iPad launch, in which I show the percent share of revenue for each product segment. Here it is updated with the last couple of years' actual results and this time I'm including the long-term projection (I wasn't this daring back then): 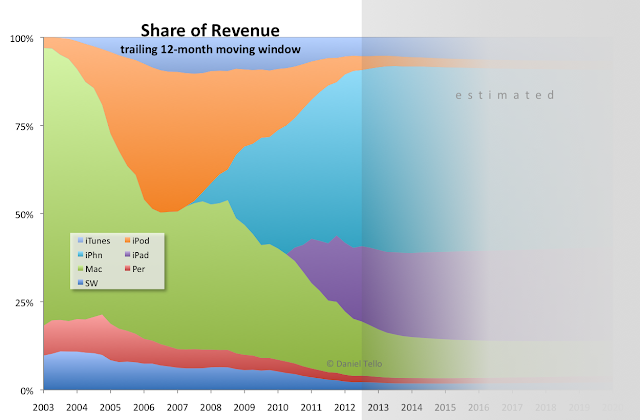 Notice the contrast between the highly dynamical history of self-disruption over the last decade, against the nearly static and boring projection I've drawn. This gives away the main motive of the projection as a mere extrapolation of the current state of affairs, an unambitious scenario that avoids trying to guess what might Apple attempt to displace next, such a guess driving a whole set of estimates which would not provide much reassurance except on some pet theory about the Next Big Thing, and most likely end up corrupting this rather clear and simple picture that faithfully (even candidly) follows along current trends. This past/future contrast is even more stark in the next chart showing the same segmented revenue shares data but from a similar perspective as the very first chart in this post (individual lines and log scale): 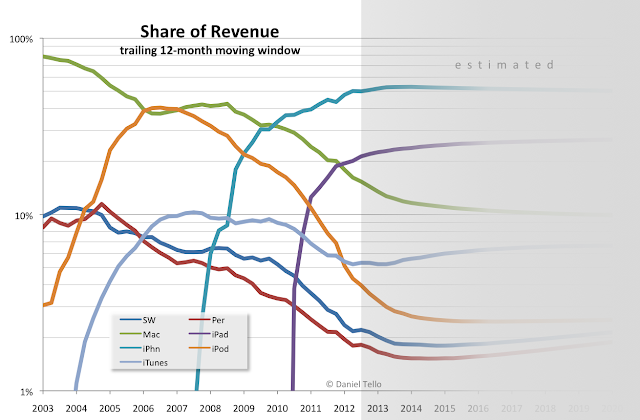 Finally, here's a new and pretty interesting one showing the adoption curves and installed base growth for each product line (see my Limits to Growth series for an in-depth explanation of these adoption models), including estimated waves for non-Mac PCs and iOS (I've used all iPods as an early proxy for "mobility" before 2008), as well as my long-term conservative projections for these adoption waves (which are the basis for the revenue estimates above). Enjoy: 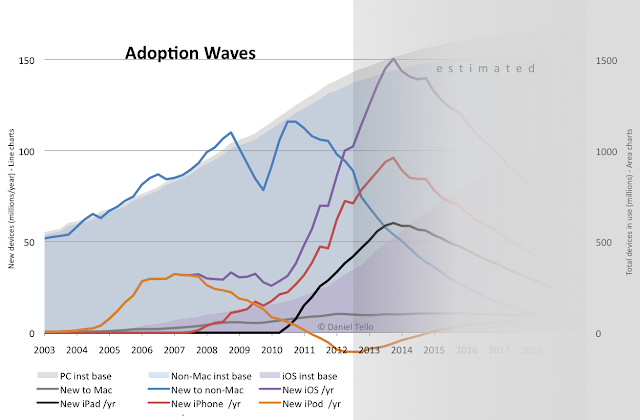 In the last plot, it looks like there is a negative number of iPods shipped. Is that a mistake?

Those are not units shipped, but units shipped to users who never owned an iPod before. Same with all the other lines in that last chart. Follow the linked article about adoption/replacement cycles (part 3 of that series has the iPod specifics) to understand how this "new users" metric could be negative (as it has been since late 2010).

Fortunately, I reviewed your logarithmic charts again today and found that I understood their magnitude only when I 'decrypted' the impact of the logarithmic scales.

Logarithmic scales highlight the decreasing rate of growth, but arithmetic scales are great for appreciating the ironic impact of the Law of Large Numbers!

Would you consider adding arithmetic charts to your article? Thanks for your great work here.

Please don't call that growth notion the Law of Large Numbers, capitalized like that as if it was its true proper name. I call it "lol numbers" to distinguish it from the real one from probability (LLN).

Seems rather conservative to me.