iPad to exceed Mac revenue in 2012

And no, it's not because I think it'll eat into Mac's growth (average about 25% growth in units, 20% in revenue for the next couple of years). But by Sep 2012 (ttm) iPad would grab the #2 spot as a revenue driver within Apple, behind the iPhone. If we annualize the current quarter's estimate it already exceeds annual iPod revenue, which was the #3 driver up to now (this even after taking into account the December seasonality which benefits the iPod).
Back in early April, before few had any clue how big the iPad would be, I had this very ambitious forecast for it, along with all other Apple product lines. I was way off in underestimating its contribution (as well as iPhone's). Here's an update to that chart: 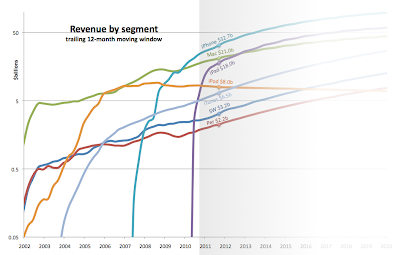 Click to enlarge. Vertical scale is logarithmic. The explicit values shown are for FY2011. Shaded right side are estimates, fading into the hazy, far-off future.
Final Q4 estimates in just a few weeks. Stay tuned!
Update: By readers request, here's a version with linear scale. I was reluctant to publish this due to the ease with which the adventurous assumptions there in the hazy side (I tried making it even hazier) could be misinterpreted as a serious forecast. Please, just look at it as a very rough illustrative example of how the product mix might look like over the next decade if things kept going in the same general direction as they are now (they won't).
The revenue for the product segments are stacked here because it makes it easier to distinguish between them. I've also included a line for the total revenue growth, so you can see the projection isn't based on some outlandish growth assumption. In fact, it may turn out to be quite conservative.
So, please understand that things will most likely be very different, obviously since there surely will be new and completely different products. With this disclaimer, I guess it's ok to share it (and if I'm right I still get to brag about it). Click to enlarge: 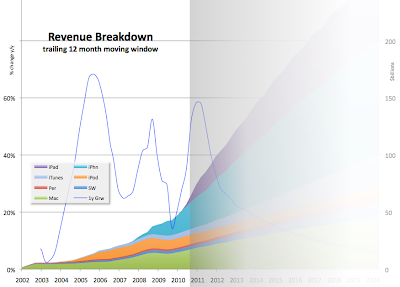 I have not tried to see beyond 2013, but this is really interesting. I respect your iTunes line. My assumption would be that the Mac would follow the iPod trajectory once the iPad overtakes it. By that time frame the iPad should be truly substituting a laptop. I would also index SW to the Mac line and the Peripherals to the iPhone/iPad.

As I always say, take the stuff beyond 2012 with a healthy dose of skepticism. The haziness is intended to suggest such uncertainty.

I think the iPod functionality is much more clearly covered on the iPhone than the Mac functionality may eventually be covered on iPad. Thus, even though there may be a similar dynamic there, I would never have the Mac line as the iPod line. I'm even thinking the iPod touch has a chance of raising the trajectory a little bit (but never like the Mac).

Yes, my SW line may be a bit aggressive. I'm expecting an iLife update early next year and a major update to the Mac OS late next year. Also, keep in mind it's not only SW, but also Services (Applecare and MobileMe and who knows what other cloudy stuff).

Can you do a linear scale version of the chart, please?

One more vote for a linear representation.

interesting work, thanks for doing this.

Hi, Daniel,
Does your chart take into account the effect of a recovery? It would be interesting to see how different economic scenarios might affect these numbers. Personally, I see the potential for a much stronger recovery than most seem to expect, but that could change if we get a paralyzed Congress. I'm not trying to enter the world of politics here. I just think it would be interesting to get your "take" on the effects of macro-economic forces on Apple's growth prospects.

Hi Daniel,
I have the intuition that the growth of the iTunes/App Store sales is going to be really big, driven mainly by the iPad success. And also I think that once that people get used to buy apps (and e-books, etc.) they do it more and more.. that is the income with the App Store is more than linear with the number of iOS devices.

Have you observed some variation in the ratio of iTunes income / iOS devices?

Congrats for your really interesting blog!

Thanks Daniel. This works much better for me.

Domingo, I do make an estimate of portable devices in use (installed base) including all iPods, iPhones, and iPads (currently near 200 million) in order to model the iTunes line by computing the ratio of iTunes revenue per device.

I do agree that apps should drive this ratio higher, the problem is that the music stuff hasn't kept up with device growth (as noted by others through the song download metrics), so the apps are merely compensating (for now) and the ratio is barely moving up.

when can we expect the next quarter estimates. I check every day and am so anxious to see what you have for us.