Duh! Ok, maybe some didn't know this. Anyway, I've done some sensitivity analysis on my model by changing one variable at a time by 10%, and looking at the resulting percentage change in EPS.
First, I simply adjusted the variable by 10% and froze all the other variables, noted the EPS change, and moved on to adjust the next variable (resetting the previous one to how it was originally). Here's a couple of charts for that (click to enlarge): 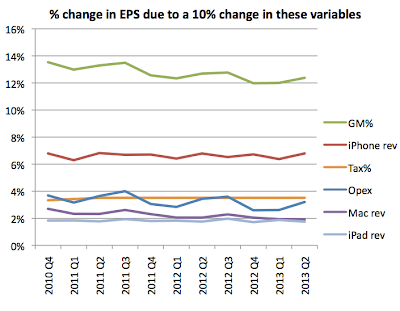 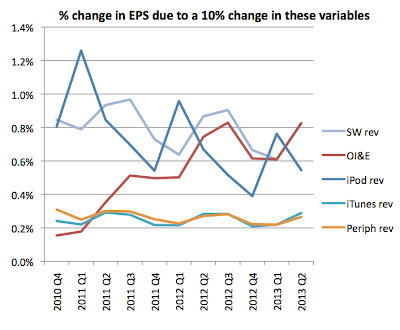 So GM% has almost twice the effect on EPS than iPhone, which in turn has about twice the effect than any of the other major factors: operation expenses, taxes, iPad or Mac revenue, all of which are way, way more important than all the other stuff (iPod, iTunes, SW, Peripherals, and OI&E). I always knew that GM was important and that iPhone was the most important of the product lines, but I didn't know these precise relationships.
But then I realized the way I ran these scenarios treats each product line in isolation to the others, because I froze the revenue on everything else while changing just one product line. This approach goes against a very important aspect of Apple's business, something I took great effort in trying to take into account in my model, which is the inter-product synergies aka halo effects. A 10% higher than predicted iPod revenue could come from higher unit sales or higher ASPs. If it's from more units, then my model has built in some effect on Mac unit sales down the road (and iPads and iPhones to a lesser extent). So, Mac revenue should not have been frozen and the resulting effect on EPS would be further amplified.
To analyze these effects, I let all the inter-connectedness in the model play out when changing each of the product lines, and I even distinguished between changing a product's unit sales or its ASP or its gross margin, with interesting insights. Here's the four main lines:
Percent change in EPS due to a 10% change in the following variables including various halo effects 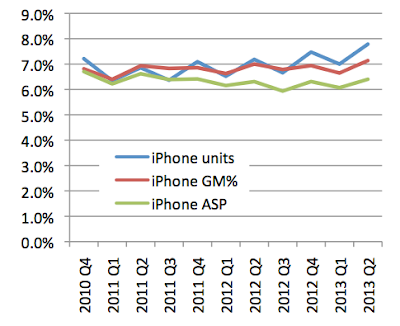 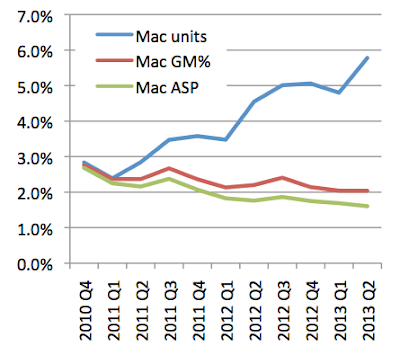 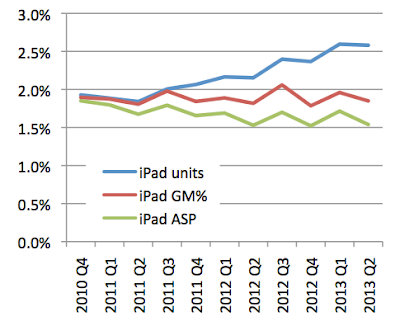 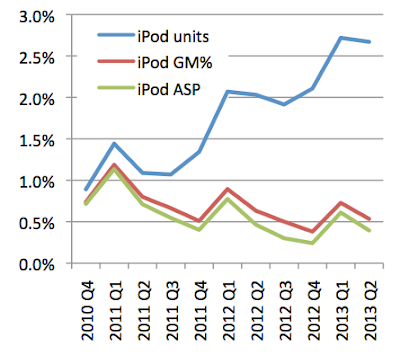 Hmm... perhaps I need to increase the halo effect from iPhones. But, since it's already the most sensitive lever, I'd rather not exacerbate its effect. So, I'll just observe these relationships for now.
Labels: AAPL, Apple, Daniel Tello, deagol, estimates, finance, investment, model, products, sensitivity, spreadsheet

Very nice. It demonstrates the significant importance that a tenth of a point on gross margin plays in arrive at estimates. Very key.

Ok, a tenth of a point (±0.1% if I understood right) might be stretching it. Such a difference in GM% would translate to less than two cents for the current quarter in my model.

Oh. My bad - I guess you can't weigh it the way I just did. I just tried to apply it directly to the percentage without taking into account how a tenth of a percent in absolute terms compares on a relative basis to other measures. I think I was confused by the general thrust of thesis. But reducing a gross margin estimate by 1% in relative terms would have a bigger impact than reducing say operating expenses by 1% right? According to your first chart that is. I remember that OI&E used to play a major role in overall earnings. Not so much these days.

"I remember that OI&E used to play a major role in overall earnings. Not so much these days."

Exactly, we can practically ignore OI&E, missing it by 50% and it would only move EPS 3.5 cents. But you can see there how I expect interest rates to climb, shown as an increasing effect OI&E would have over the next couple of years (climbing red line on the second chart).

Interesting analysis. Yes GM is significant, and a significant component of GM is material cost. Buying power gets your material cost down - and with $45B+ in the bank, AAPL has buying power. You get a great price when you call up Toshiba looking for a billion dollars worth of Flash. That's why I don't want a share buyback - it's a better investment to leave the cash with Jobs.