I'm not a fan of revising estimates the day before the report. However, this time Apple has essentially pre-anounced the iPad number and everyone will post their revisions, so I might as well get on with it. In addition to the more than four million iPad units shortfall, I'm revising the Mac estimate lower by half a million units mainly on an inventory drawdown and, to a lesser extent, widespread reports of PC market weakness.

These changes result in about $3 billion lower revenue and $0.80 lower EPS for the quarter. The gross margin percent goes up about 70 basis points on the higher iPhone mix.

Additionally, I took this opportunity to tweak the longer-term projections to account for the new products introduced yesterday. Here are the usual details:

What is Apple Worth? Part 2: Paradox Resolved?

In part 1 of this series I talked about Daniel Bernoulli's brilliant idea of using a concave utility function to solve the St. Petersburg paradox, a problem originally posed 300 years ago (and a couple of decades before Daniel's solution) by his cousin Nicolas. I explicitly suggested a strong parallel with the way Apple is being undervalued as it gets bigger and bigger, and ended with a discussion of how the overused modern phrase "law of large numbers" (aka lol numbers) as misused by current mainstream financial media talking heads (when referring to the "limits of growth" concept) ironically is in contradiction with the actual fundamental probabilistic concept called the Law of Large Numbers (LLN), first proved by Daniel's and Nicolas' uncle Jacob Bernoulli: If Jacob's LLN applies, the likelihood that Apple will continue to grow would seem higher, given the historical empirical record, not lower (as the lol numbers trite cliche implies). On the other hand, if in fact there are limits to growth being reached, then the actual LLN is violated (independence of trials). In short, the semantic confussion and logical contradiction of invoking a misnamed "law" to justify persistent multiple compression despite continued strong growth in Apple's earnings might get resolved by reinterpreting it not necessarily as limits to growth but instead as an expression of the concept of diminishing marginal utility (although these two concepts might be related after all).

For this part 2 my goal was to explain why and how such a simple solution of a concave utility function works in assessing the pragmatic value placed by most people on such big yet unlikely potential returns as well as why and how the specific logarithmic utility proposed by Bernoulli might not work in every case, and how the theory eventually got refined over the years, decades and centuries. This is no simple task: to wade through 300 years of academic literature on economic theory, and most recently financial theory, from the incipient probability research to modern portfolio theory and CAPM. For an example of the nature of the literature, check out this 850 page book (many pages omitted in that Google Books preview) focused only on a singular very specific thread (the Kelly Criterion) within the broader subject. Even if I could digest and condense all of it into a blog post (which I definitely can't), I wouldn't want to submit my readers to such a dry academic dissertation. Besides, it's mostly way over my head. Hence, after being set back on my promise to post this within a couple of weeks of part 1, I've finally decided to go with a very simplified intuitive exposition, but leaning heavily on the multiple referenced links provided (with the caveat to only rely on Wikipedia for a superficial glance and to conduct your own research through more reliable sources if a deeper understanding is needed). Apologies if this ends up with significant theoretical holes.


[10/24 UPDATE: In light of information revealed during the October 23 event and, to a lesser extent, widely reported PC industry weakness, I'm revising iPad and Mac estimates for Q4. I now estimate 4m fewer iPads and 0.5m fewer Macs (mainly inventory drawdowns) results in about $3b less revenue and $0.80 lower EPS. Gross margin percent goes up about 70 bps due to mix. I'll be posting a detailed revision later today (here).]


As of Tuesday's closing price of $661.31, AAPL is trading at a 10.1 multiple on my forward EPS estimate (8.1x ex-cash). Valuation remains attractive despite the 9.1% increase in share price and downward revenue/EPS estimate revisions for FY13 of 8.7/10.4% over the last 3 months.

What is Apple Worth? Part 1: Regarding Large Numbers

“Peter tosses a coin and continues to do so until it should land "heads" when it comes to the ground. He agrees to give Paul one ducat if he gets "heads" on the very first throw, two ducats if he gets it on the second, four if on the third, eight if on the fourth, and so on, so that with each additional throw the number of ducats he must pay is doubled. Suppose we seek to determine the value of Paul's expectation.”

The expected value suggests that a player should be willing to pay any amount asked for a chance to play this lottery. Yet, in real life no one in their right sense would pay more than a few ducats to play this, perhaps somewhere around 5 ducats. Why is it that the mathematical expected value doesn’t reflect the real value placed by real players on this lottery?


As of Friday's closing price of $605.88, AAPL is trading at a 8.9 multiple on my forward EPS estimate (7.0x ex-cash). For guidance and forward-looking valuation I'm assuming an iPhone launch in September (which paradoxically is the conservative view for the long term). This implies about 6m units shifted into this fiscal year instead of next, and affects the replacement cycle timing well into 2014. Still, I'm including estimates for the October launch scenario below so you can pick your own.

The valuation metrics provided below are intended to track the market price of the shares at the given timeframes, and thus exclude any dividend paid up to that point in time because the dividend is subtracted from the cash balance, as it should. However, because my underlying theory is that shares should be (roughly) valued on a forward-one-year basis, to compensate for this one needs to add back into the value the next 12-months worth of dividends. 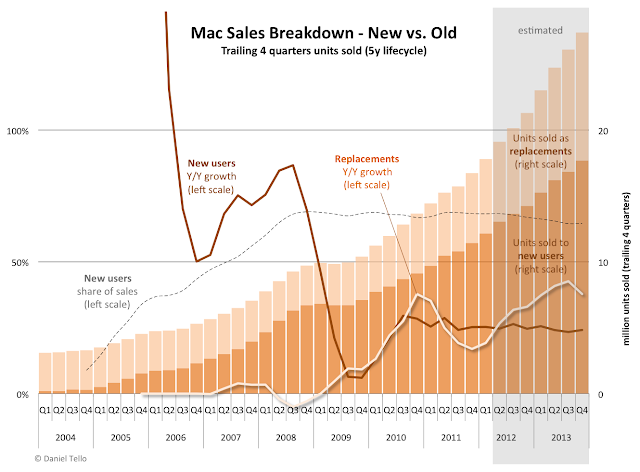 Mac: The Limits to Growth (Part 2)

To give full growth to that which still doth grow?

(this post is a continuation of this one)
If you haven't read the first part of this exercise, please at least skim through it so you can take better advantage of whatever insights might come from the analysis presented here.

I'm going to try to observe the evolution of the size of customer installed bases, which should gradually expand (or contract) in typical s-shaped patterns (aka sigmoid, logistic or other similar functions) when plotted over time. This derives from the notion that significant, long-term changes in customer adoption driven by innovative technologies require time to play out, as different segments of customers react differently to change, even assuming immediate information transfer about the innovation (which is not the case even in the internet age).
I'll tend to focus the charts around easily visualizing the yearly variation of the customer bases considered (y' continuously but ∆y given our discrete data) which should roughly fit a bell shaped curve. The shapes don't need to be exactly as the figures shown previously since those were just two very simplified examples given arbitrary theoretical assumptions on how the relative growth rate y/y should moderate as y gets bigger (notice the subtle distinction between y'/y=relative rate of change refers to the continuous modeling notation and "y/y=year over year"or "q/q=quarter over quarter" as the discrete modeling shorthand for the same measure).
So, for this second part I'll start with a broad historic view of all computing, and later dig into the adoption of traditional personal computers highlighting Apple's participation of such adoption, while aiming to give some perspective on the Mac's potential opportunity for expansion within that market. I'll leave a more detailed scrutiny of the recent mobile revolution for a later post.

Apple: The Limits to Growth (Part 1)


‘Rule Forty-two. All persons more than a mile high to leave the court .’
Everybody looked at Alice.

"Population, when unchecked, increases in a geometrical ratio, Subsistence, increases only in an arithmetical ratio."
–Thomas Malthus

"Evolution is the result of a sequence of replacements."
–Elliot W. Montroll

In light of such an impressive long-term performance, last quarter's 73% and 116% Y/Y growth, in revenue and EPS respectively, may seem like par for the course. Indeed, this is the way many "savvy" yet uninformed investors characterize Apple and AAPL: as a momo growth stock bound to fall off a cliff (so many examples from last year: NFLX, RIMM, FSLR, APKT, SINA, just to name a few) as soon as the scorching growth cools down a bit (and it will sooner or later, that's an undistputable fact).

Apple shares today are flirting around the record all-time intraday high price of $426.70, yet that still represents a record low valuation of 8.6 times my forward-looking EPS estimate (6.6x ex-cash).

A cash balance of $409 per share is estimated by June 2016, and $432 by the end of that Fiscal Year in September 2016, still surpassing the current market price within 5 years from now (this assumes no dividends so if you're reading this in 2016 remember to add back any of those plus interest).

As for the most recent past, and immediate future: