Tomorrow Apple will report its financial results for Fiscal Q4 2011. My estimates were published a couple weeks ago. Most savvy AAPL investors already know what to expect thanks to the excellent work of Apple 2.0's Philip Elmer-DeWitt, in compiling and contrasting all estimates made by professional analysts working for the biggest banks, brokerages, and financial research institutions, as well as those made by independent (aka bloggers or "amateurs") AAPL analysts.

These days the gap between these two types of analysts has grown immense. According to Yahoo! Finance, Wall Street analysts are expecting EPS of $7.28 on $29.45b in revenue, on average, while PED's compilation of pros shows an EPS average of $7.31. But the 16 independent bloggers/amateurs he polled are expecting EPS of $9.07 (24% higher than pros) on $33.47b in revenue (a cool $4b higher), on average. For the last few quarterly "smackdowns" pitting bloggers vs. pros, PED's been using a "two billion gap" mantra in his titles, which already seemed preposterous. Well the gap has now widened to $4b and it seems to me this trend will continue.

Most financial websites which provide stocks' forward-looking valuation information do so based on Wall Street's professional analysts data. This means widely quoted forward P/E multiples you'll see in almost every article panning (or even recommending) AAPL as a potential investment, are blindly following the blind. Fortunately we have PED's work and the couple dozen independent analysts trying to get a better sense of AAPL's financial performance, and most importantly, sharing and publishing the results.

To suffer woes which Hope thinks infinite;
To forgive wrongs darker than death or night;
To defy Power, which seems omnipotent;
To love, and bear; to hope till Hope creates
From its own wreck the thing it contemplates;
Neither to change, nor falter, nor repent;
This, like thy glory, Titan, is to be
Good, great and joyous, beautiful and free;
This is alone Life; Joy, Empire, and Victory!

An alternative long-term valuation metric I introduced in my "Get AAPL for free" post from July, which had Apple's cash balance matching the then current share price within 4.5 to 5 years is maintained, with Apple's cash estimated at $381.16 per share for the quarter ending in June 2016. As I pointed out then, it's a very conservative scenario that does not assume any new product category and now involves even more cautiousness with EPS growth slowing down to 10% by then (was 15%). Just trying to somehow align that base case with the current valuation multiple and its implied market sentiment.

The rest of the details:

Here's to the crazy ones


Here's to the crazy ones.
The misfits.
The rebels.
The troublemakers.
The round pegs in the square holes.
The ones who see things differently.
Read more »
Labels: AAPL, Apple, iPad, iPhone, iPod, iTunes, Mac, Steve Jobs, Think Different, Tim Cook
2 comments

Apple at record high yet cheap as ever

Still, despite the 20%+, 64+ point run in less than a month to a record all-time intraday high today of $374.65, those buying AAPL at that price are still getting it at a near-record low (recent years) valuation multiple of only 10.8 times my forward-looking EPS estimate (8.6x after excluding cash).

Get AAPL for free - yet another opinionated valuation analysis

These days there's been endless discussion about AAPL valuation, some as usual focused on Apple and its perceived risks, some scolding everyone for even talking about valuation as it's "evidently" irrelevant, and more recently some more focused on market mechanics and manipulation. There's evidence and theory and some data to back almost any combination of reasons, be that pro or con any specific issue. Precisely because of this, most points of view end up being opinion based. I won't even point you to any article as there's been too many and I don't want to bias your research by picking my favorites (check on the list of links at the right for some of them). Or just Google "AAPL valuation" and filter by "last month" with the search tools on Google's left panel.

So here, to add my take to the "AAPL valuation is nuts" opinionated pool, I've chosen to do it without addressing any of the common issues. Yup, you read that right. I won't talk about management uncertainty or competitive forces or the broader economy or sentiment or market manipulation. There's plenty on all of that elsewhere, and usually (if you're good at parsing trolls) insightful and exhaustive discussion through those articles' comment systems.

Sorry for taking so long to post about Apple's fiscal 2Q 2011 results. By now everyone surely has all their answers, so I'll keep it short (and you can get the gritty details in the tables below). Compared to my estimates, a huge iPad miss ($1.6b) partly offset by iPhone upside ($1.1b), among lesser effects, resulted in almost $600m revenue miss. All of it was made up through lower costs hitting operating income within 0.2%, and nailing pre-tax income. Slightly lower tax rate and share dilution than expected resulted in EPS 8 cents (1.2%) higher than expected. All margin ratios were slightly better than expected. Revenue guidance roughly inline but EPS guidance significantly higher than expected, which suggests continued high margins. Here's all the details:

Which analysts are the biggest sandbaggers - charted

Over the past year or so I've been tracking all of us analyst performance in forecasting Apple's financial metrics, and ranking us based on the 6 or 7 categories of estimates compiled by Fortune's Apple 2.0 blogger Philip Elmer-DeWitt, and the outcome has always been a consistent underperformance by pros (see here, here, here and here). The comparison and friendly "competition" has almost become laughable, if it weren't for the serious amount of capital that these "professional" analysts look over, and thus the effect of their cluelessness on Apple's share price gets felt.
However, all this time I've been applying a somewhat forgiving methodology on my rankings. By averaging out all the categories with equal weights, the resulting score improperly reflects the relative importance and sensitivity on the stock price of these variables. It should be clear to all investors that forecasting earnings and revenue is most critical, while the number of iPods sold has very little effect (for quite a few years now) on Apple's financial performance. Yet by applying the same weight to these, the effect of the most important metrics gets watered-down by the less important ones so the analyst scores and thus the rankings do not reflect what investors should be focusing on out of all the stuff analysts throw out there.
Read more »
Labels: AAPL, analysts, Andy Zaky, Apple, Apple 2.0, bloggers, consensus, Daniel Tello, deagol, Dennis Hildebrand, EPS, finance, investment, PED, pros, revenue, smackdown, Turley Muller
10 comments

A few weeks ago I stumbled into the old The Motley Fool board for AAPL, and was surprised to see them open without subscription. My recollection from about 10 years ago was that they had gone to a paid subscription model, and thus I had abandoned them for good and never looked back in these 10 years (nothing against the Gardner bros. investment style but wasn't a fan of their constant spamming for their newsletters).

So it seems at some point in the last 10 years they decided to go with a freemium model. Anyway, as I was reading some of the posts, I think I recognized some of the old nicks from way back then. I got curious and decided to search for my old posts. Couldn't find them on a first try, but then I tried an alternate nick I used and there I was, in full 10-years-younger and slightly snarky-er glory, trying to be all witty and all that. (Ah, the old interwebs... hasn't changed one bit from the usenet days, it seems. Or rather, people haven't changed.)

So, here's my very first post ever on an AAPL board, and to my surprise (seriously), it's an EPS estimate:

I was planning on posting my estimates next week once the quarter had ended. However, because the last few times I posted estimates AAPL was priced closer to the next-3-months low than its next-3-months high price, and seeing as right now we're barely above the most recent low, I didn't want to let this opportunity go by.

In the last 3 estimate posts, I included a P/E blurb highlighting how extremely undervalued was the then current AAPL price. Here they are, for reference: 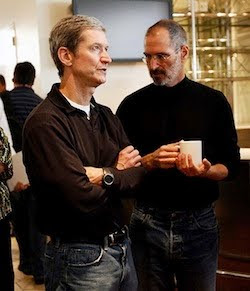