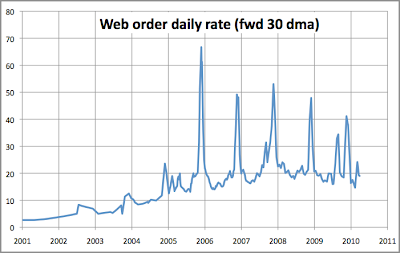 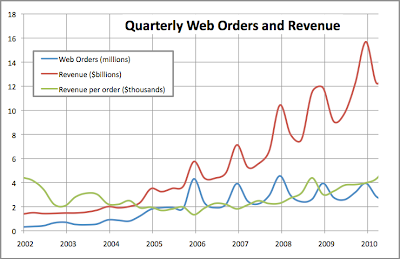 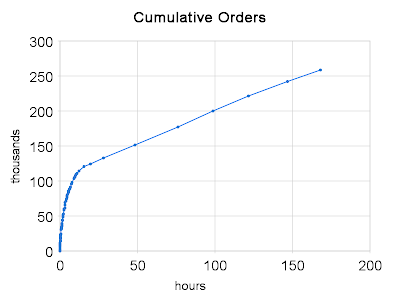 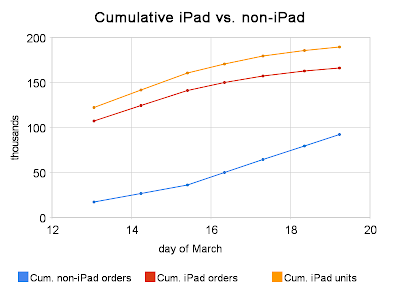 Well, there you have it. That's my update for the week: 180 thousand units pre-ordered online as of noon yesterday. [Update, 190k as of Friday morning, exactly a week after becoming available for pre-orders.] It obviously doesn't include store pickup reservations, nor will it include store sales after April 3 (if I'm still getting order submissions and bothering to track these). That's it. Based on this, and using my intuition and experience, and voodoo or however you want to call it, I'm sticking to my prediction of 1 million sold by mid-April.
PED: iPad week 1: 190,000 pre-orders
As you can see, that conclusion amounts to not much more than my opinion. But the data in the first three graphs is factual, not opinion or estimates. Thus, my recommendation is that you come to your own conclusion as to how this might measure against expectations, both short and long term (although I would advise against putting too much weight into short-term market predictions) and decide for yourself, regardless of whether I'm right or wrong in my opinion-based prediction.
Thanks for all contributions.
-d
Labels: AAPL, Apple, Daniel Tello, deagol, finance, history, investment, iPad, model, pre-order, spreadsheet, weborders

Of course almost no-one has seen or touched an iPad yet. Only a few will buy unseen unconditionally. Thereafter I'd expect pre-orders to drop below their eventual run rate until after April 3rd. Or they can have the best of both worlds by reserving; then they get to see & touch before they commit to their reserved iPad.

. . . in any event, the current web order run rate is likely to substantially underestimate the post-April 3rd sales rate, IMO.

I reserved one (didn't pre-order) but, unlike preorders with a limit of 2 per person, there's only a limit of 1 per person for reservations. In the long run, this is irrelevant. "reserved" can be treated as coming in-store to shop, and will fall in your 1 million by mid-April estimate.

Any way any body try to guess this event, AAPL will sore to $300 and the Ipad will be a game changer for all, world wide!.
That is for sure.
I remember all the good and bad news before the Iphone came out and it change the world as well at the end!.

I like the way you honestly qualify your conclusions.

Excellent. Just outstanding. In the years that I have been reading your work, three things set it apart: 1) the effort you put into it, 2) the honesty and openness with which you present it, and 3) the accuracy of the predictions. The constantly changing environment, especially since 2007, has made this last point all the more remarkable.

Tremendous amount of work, and excellent work done. I do wonder whether people are reserving one iPad WiFi and one with 3G. That way, they can try the WiFi version and choose to cancel the 3G, or return the WiFi version (taking advantage of Apple's very generous return policy) and shift to the 3G. In other words, rate of advance orders and ultimate sales may well not be anywhere close to one another.